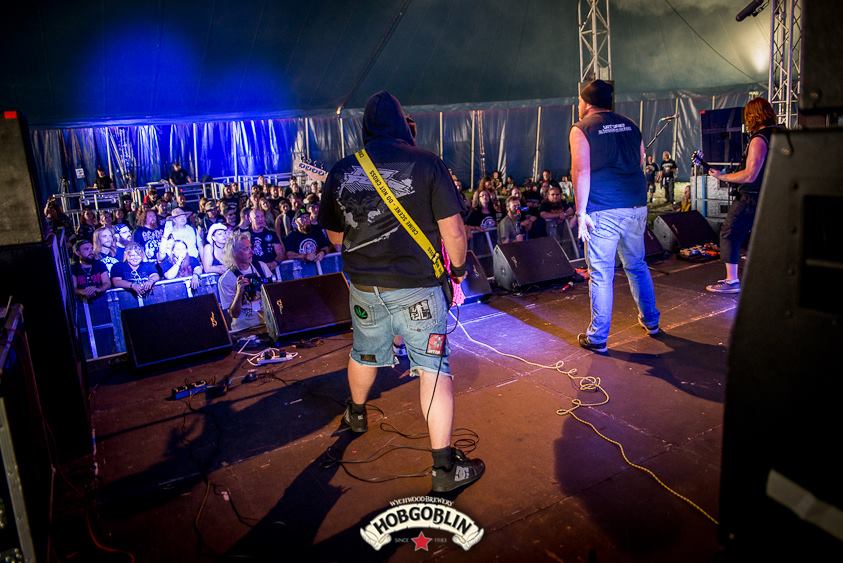 As you know, each year I like to do a round up of some of my favourite Left For Red moments from the last 12 months, from my point of view. We all have different shows that we enjoy more than others but this year it is so hard to condense it down to just a few moments.

2015 has been an incredible year from start to finish: we released our very first full length album, sold out the O2 Academy and played some huge festivals. This is what the phrase “living the dream” was invented for. I say this a lot, but if 16 year old me knew what he would achieve later in life, I think he would be shocked.

Our year started with a massive show with our friends in Balls Deep and Internal Conflict as they went out on a long tour called ‘Rising Aggression’. Not only did I have the honour of promoting one of the dates with Bearded Monkey Promotions, but they also asked us to join them in Coventry….the place was heaving and the beer was flowing. A huge thank you to Fargo Events and FATangel Management who put on the show and rammed the venue from start to finish.

Next up was our album launch, a concrete line up including our friends from the big city, One For Sorrow, as well as some local favourites, I Hate You More and Vexxen. This was our first ever hour long set and it seemed to last just 5 minutes. I had a huge grin on my face the whole time, as I had never played in front of a crowd so loud in my entire life. The night was incredibly special; the feeling you get when fans sing along to your songs is indescribable… A huge thank you to Hils Ovation (the mother of Metal!) for putting on such an event. She has taken care of Left For Red from day one and we owe a hell of a lot to this lady.

We then toured around the country, playing shows in places such as Nottingham, Gloucester, Tamworth, Liverpool, Chester, London, Leicester, Wolverhampton, Brighton, Northwich, Wakefield, Mansfield and more. 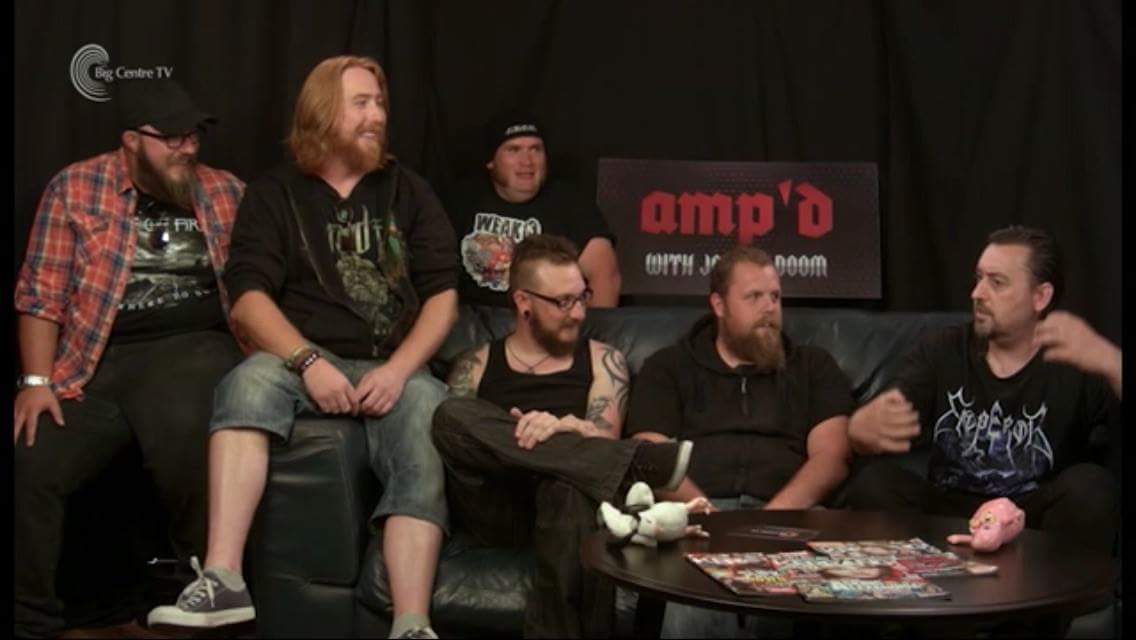 Another huge achievement for Left For Red this year was breaking into the London scene. For years I had been trying to bring LFR to the capital…..London is an amazing place and I personally have loved every trip I have ever had down there. It’s a ball ache getting there, but we did two shows in London this year. The first was supporting our brothers in the mighty Def Con One at The Unicorn in Camden – wicked show and a good crowd considering nobody had heard of us…..For our second visit to London, we were asked to open the show for The Heretic Order at their album launch in Islington at Nambucca with One For Sorrow and Dethonator. As massive fans of The Heretic Order and Breed 77, it was fantastic to be involved…. It was also our first time playing for Mick Wood – heard a lot about this guy and it was all true…..He pours his heart and soul into his gigs and that is why every band that I know, that have played for him haven’t had a bad word to say….He competes not only with an ever changing music scene in London, but also with the government’s planned venue closures in the area.

Now onto what summer is made for – FESTIVALS! This year we played some incredible festivals and all dayers including: Midland’s Metal Crusade, supporting Evil Scarecrow and Heart Of A Coward; Sophie Fest in Tamworth, although I didn’t make that one; Mosh Against Cancer, arriving by the skin of our teeth, managing to park up, get straight on stage and somehow still starting our set by our allotted time with the added bonus of an amazing reaction from the audience. Further festivals included Rock Diabetes….this is one of our personal favourites. We have played here twice, supporting two of our heroes – Diamond Head and Paul Dianno (Ex-Maiden). Lostock Music Festival required hard work and endeavour to make it a success – kudos to Prometheus Promotions as Mick broke his arm and still managed to get all bands on stage and sound checked within time limits. We love festivals as you get to turn up early, get settled and catch up with friends! Plus the added bonus of getting to watch a load of bands. 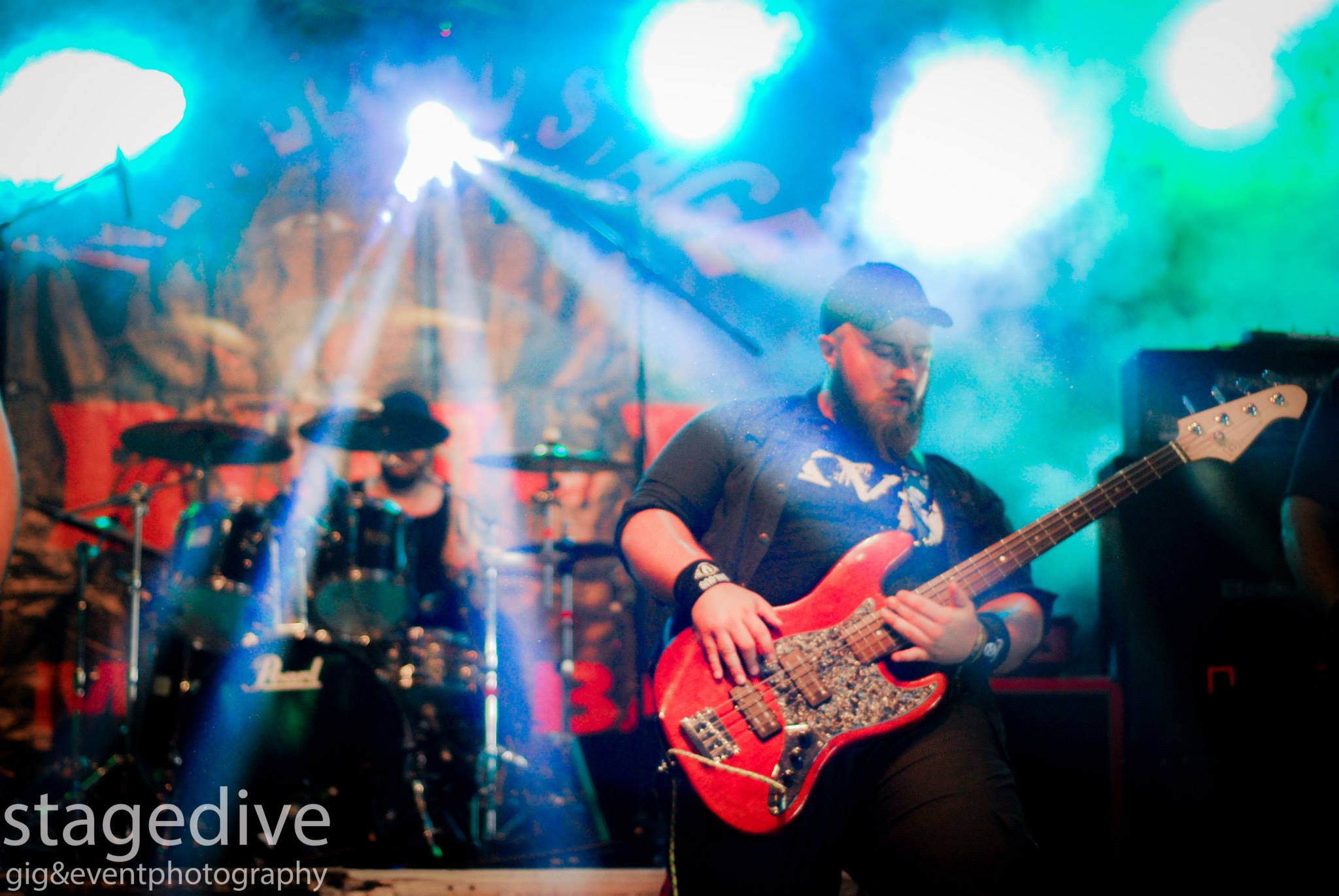 …..This year we managed to play not one but two huge festivals, the first of which was Mammothfest down in Brighton….I heard of this festival several years ago. Having seen bands such as Orange Goblin, Entombed, Malefice and Breed 77 on the bill, I really wanted to get down to play the event…..On a side note, I really feel that having my own promotional company – Bearded Monkey Promotions – helped boost the name of Left For Red. As I have worked with some fantastic people, I was due to co-promote an all dayer for the 27 date tour that Mammothfest were putting together, but unfortunately, due to an incompetent venue owner, we had to shut this down…..but Mammothfest still went ahead and they still let us play, so we played our first gig by the sea side….loved it!

Bloodstock Festival. My heart was racing when I first got that call from Simon Hall…..I felt bad for Simon as, when he told me that we would be performing on the New Blood Stage at Bloodstock Open Air 2015 on the same day as Rob Zombie, I was screaming like a little girl whilst pacing around the classroom I was in….I couldn’t stop saying “fuck, fuuuuuuck, fuuuuuuuuuck”……..Still to this day I cannot believe that we actually played it. I have been going to Bloodstock since 2010 and it soon became my favourite festival. It’s compact, clean and I have never seen one idiot there (until we got announced). We had some fantastic representation from FATangel Management as they worked hard to get us as much media coverage as possible. We also made use of the VIP bar quite a lot! You can check out my run down of the festival here!

So we have come to the end of 2015, I just wanted to thank every single band, promoter, reviewer, photographer and most importantly fan! that has been a part of this crazy ride with us. Never in a million years did I think we would get this far, already next year’s diary is filling up nicely with the launch of our new single ‘Utopia’ which is going to be released at our headline show at the O2 Academy on the 26th March 2016.

With lots more to be announced.

This is a list of SOME of the bands, Management Companies, Media, Record Labels  and promoters we have worked with this year….I say ‘some’ as I am bound to forget so many!

Once again apologies if I have missed anybody out…..it was a bit ambitious of me!

We hope you all had a very Merry Christmas and have a very drunken new year! Thanks for your support!