After another awesome Thursday night gig at the Pit and Pendulum Nottingham, the Left For Red tour bus rolled out again on Friday, this time a little closer to home, as the Flapper Birmingham played host to LFR and TNA’s newest wrestling super star Rockstar Spud!

Following our recent  Kerrang  competition win, Team LFR were invited by TNA wrestling to join Rockstar Spud in a farewell  meet and greet with fans before the British Boot Camp champion flies off to the states to start his new career in America. Now, we may have been mid tour with our good friends  Valous but how could we pass up the opportunity to return to the venue  where we’d  had so much success launching our EP two months earlier. This, 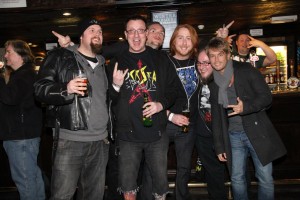 coupled with the honour of sharing drinks with TNA’s new wrestling super star, seemed like the perfect way for LFR to spend a day away from the studio.

Needless to say Rockstar Spud was a “star” and we had great fun sharing a drink or three with him (courtesy of TNA) as we met and spoke to fans, signed autographs and posed for many a photograph. Not only was Spud a nice guy, he was a natural with his fans and was genuinely happy to speak to them and answer their questions. Even standing out in the bitter cold to have several photos taken did little to dampen his mood.
So we at LFR wish Spud all the best as he flies out to America, the guy has worked hard for his success and deserves to do well.

As for us,” The mercy you once knew” tour continues to roll.

LFR’s “Kneel Before You Die” will air on TNA Impact, Sunday the tenth of March on Challenge TV.