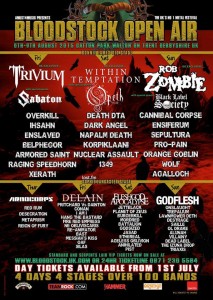 Due to the huge number of bands playing at Bloodstock this year, and the fact that our two roving reporters will actually want to watch some of them, we’re doing a little round of pre-festival interviews this year. We’re focussing on the bands playing the Jagermeister and Hobgoblin New Blood Stages so they get a chance to convince you to go and watch them. Remember, these guys and gals are the future of our musical world!

Simple things first – where are you guys from?

We are from Stourbridge in the West Midlands.

How did you meet?

We all met at various times in our life. LC, Rob and Phil have known each other since they were younger. Dan and Rob met in college and we all met Aaron through friends on the metal scene.

How long have you been playing together as a band?

We are into our sixth year as a band but as this line up about 3 years.

Where does the name of the band come from?